Review: Into the Dalek 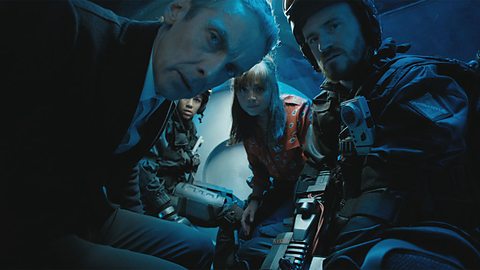 Into the Dalek // Reviewed by James Chapman

I’ve commented before on the trend in recent seasons of Doctor Who for episodes that to all intents and purposes rework the scenarios of popular movies: ‘Asylum of the Daleks’ (Escape to New York), ‘Dinosaurs on a Spaceship’ (Snakes on a Plane), ‘A Town Called Mercy’ (Westworld meets The Terminator) and ‘Cold War’ (The Thing from Another World meets The Hunt for Red October) are all good examples. There’s nothing wrong with this of course: popular culture often draws upon itself for inspiration and reworks old tropes and ideas. It’s often been said that there are only seven basic plots in popular fiction (though I’ve never met anyone who can name them!). And as classic Who writer and script editor Robert Holmes was fond of saying: “All you need is a strong, original idea. It doesn’t have to be your own strong, original idea.”

Here the ‘original idea’ is miniaturisation: to shrink a team of soldier/medics so they can enter the body of an ailing patient. The Doctor immediately recognises the source: “Wow – a molecular nanoscaler! It miniaturises living matter. What’s the medical application? Do you use it to shrink the surgeons so they can climb inside the patients … Fantastic idea for a movie!” The movie in question of course is Fantastic Voyage (1966) which is probably more famous for Raquel Welch’s costume than for its special effects (which nevertheless won an Academy Award). In fact Doctor Who has been here before in the Fourth Doctor/Leela serial ‘The Invisible Enemy’. The difference this time is that the patient is a Dalek.

It’s sometime in the future – presumably during the Dalek Wars which would place it in the same time frame as the classic series’ ‘The Daleks’ Master Plan’ – and the Doctor has saved space pilot Lt Journey Blue from a Dalek attack ship. Returning her to the command ship ‘Aristotle’, hiding from the Daleks in the asteroid belt, the Doctor is shown a damaged Dalek which begs for his help. This is, apparently, a ‘good’ Dalek that has developed a conscience and a moral compass, to the extent that it realises the evil of its own race and has determined that they should be destroyed. As the Doctor says: “A Dalek with a conscience – how can I resist!” The cause turns out to be some sort of radiation leak which, when sealed, hence ‘healing’ the Dalek, inevitably has the effect of turning it back into a genocidal killing machine. The Doctor realises that the radiation has expanded the Dalek’s consciousness and, with Clara’s help, succeeds in turning it ‘good’ again by reawakening its suppressed memories.

It was a good idea to do a Dalek story early in this series. There’s always a sense that a new Doctor is not really the Doctor until he’s encountered his oldest foes. In 1966 the production team played safe in introducing Second Doctor Patrick Troughton by pitting him against the series’ favourite monsters in ‘Power of the Daleks’. The Fourth Doctor also met them early in his tenure in ‘Genesis of the Daleks’. Russell T. Davies was determined to have the Daleks in the 2005 series – would it really have been Doctor Who without them? – which reportedly required some careful negotiation with the estate of Terry Nation. I felt that during the Davies/David Tennant era the Daleks were rather over-used, as they had been in the mid-1960s. Steven Moffat has on the whole preferred new monsters to old – and has used his best ones, the Weeping Angels, sparingly so as to maximise the fear-factor when they do appear. Matt Smith’s Doctor encountered the Daleks in his third episode (‘Victory of the Daleks’) but there was only one other fully-fledged Dalek story throughout the Eleventh Doctor’s era.

The best Dalek stories have generally been those, such as ‘Genesis of the Daleks’, ‘Revelation of the Daleks’ and ‘Dalek’ from the 2005 series, which have not used the Daleks simply as robotic menaces but have taken the opportunity to explore wider moral and existential questions. Unlike much popular SF, Doctor Who has rarely (perhaps only during the ‘Key to Time’ series) represented a Manichean universe of Good and Evil. Most of the time the series has dealt in shades of grey, often – especially in new Who – focusing on the consequences of the Doctor’s actions and interventions in the course of history. The moral dilemma of ‘Genesis of the Daleks’ – in which the Doctor was charged by the Time Lords with travelling back to the moment of the Daleks’ creation in order to prevent them from becoming the greatest threat the universe has ever known – turned on whether he would be justified in destroying the Dalek embryos (“If I kill, wipe out a whole intelligent life form, then I become like them. I’d be no better than the Daleks.”) A similar theme was explored in Rob Shearman’s excellent 2005 episode ‘Dalek’. Here the Ninth Doctor, traumatised by his experiences during the Time War, demonstrates an almost pathological hatred of an enemy he thought had been vanquished. “I saw it happen – I made it happen!” he tells the last surviving Dalek. “You would make a good Dalek,” it replies. 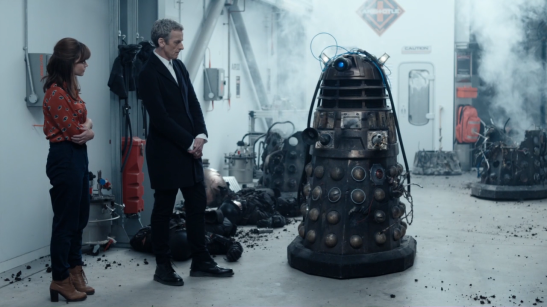 ‘Into the Dalek’ similarly explores some of the Big Questions that make Doctor Who, at its best, so much more than a mere television series. Here the issue is what makes a ‘good Dalek’ – even, indeed, if such a thing is possible or desirable. In the Daleks’ own terms a ‘good’ Dalek would be one that obeyed orders and fulfilled its instinct to exterminate every other living creature. When ‘Rusty’, as the Doctor has christened his patient, develops a conscience and realises the evil of his own species, his conclusion is that they must be destroyed: “I see into your soul, Doctor. I see beauty, I see divinity, I see hatred. I see your hatred of the Daleks and IT IS GOOD. DEATH TO THE DALEKS! DALEKS ARE EVIL – DALEKS MUST BE EXTERMINATED!” This was not the outcome the Doctor had intended when he had fused his own memories into Rusty’s memory banks and he is dismayed at the result: “No! There must be more than that!” One line echoes the 2005 ‘Dalek’ episode as Rusty tells the Doctor: “I am not a good Dalek. You are a good Dalek.” More than ever the episode seems to be suggesting that the Doctor and the Daleks need each other to define themselves: neither has any meaning without the other. It was ever thus with antagonists: Sherlock Holmes and Professor Moriarty, for example.

In only his second episode Peter Capaldi has already established himself confidently as the Twelfth Doctor. He is restoring a welcome ‘edge’ to the Time Lord after the more touchy-feely Tennant and Smith incarnations. His apparently indifference to death – including Journey Blue’s brother and Trooper Ross – reminds us that the Doctor is an alien who has witnessed countless wars and genocides in his two-thousand years. But his brusque manner disguises a more sensitive interior that Capaldi’s Doctor is willing to reveal only to Clara: “Am I good man?” he asks her. “I don’t know,” she replies. Not since Colin Baker’s Sixth Doctor has the darker side of the Time Lord’s character been so much in evidence. This is suggestive of a greater level of psychological and intellectual depth to this series that is very welcome.

Elsewhere Moffat lays down some plot business for future episodes. Clara, now established as a schoolteacher at Coal Hill School (a fan-pleasing reference to the very first episode of Doctor Who) has a putative new romantic interest in fellow teacher and ex-soldier Danny Pink. We know that this Doctor doesn’t like soldiers – at the end of the episode he refuses to take Journey Blue as a companion – and can expect that this is setting up some drama for later in the series. Whether the fact that supporting characters seem to have colour surnames (Pink, Blue) has any significance will no doubt be revealed later too. The dead trooper surprised to find herself in some sort of afterlife (“Welcome to Heaven”) links back to last week’s Clockwork Robot arriving in the ‘Promised Land’: a characteristic piece of Moffatry that hints at some over-arching story arc that has yet to be revealed.