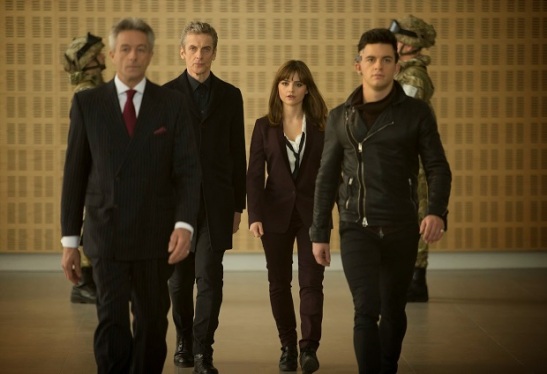 One of the pleasures of Doctor Who has always been the range of different types of stories and narrative templates that its ever-flexible formula allows. The Doctor’s ability to travel anywhere in time and space mandates just about any situation that a writer can imagine. And while there have always been recurring templates – historical adventures, Earth invasion narratives, Gothic horror and, in the new series, epic space operas – there has always been space for different takes on familiar ideas. I am one of those fans who felt that towards the end of the Russell T. Davies period the structure of each season had become somewhat formulaic: an Earthbound introduction for a new companion, followed by ‘backwards and forwards’ stories into the past and future (or the future and the past), an ‘old monster’ story placed somewhere near the middle of the series, etc., always building towards an apocalyptic climax that usually seemed to involve the Daleks. Steven Moffat’s first season as showrunner partly followed the same overall formula, but since Series 6 the structure of each season has changed. There have been fewer old monster stories and, from Series 7, the two-part stories have been replaced by stand-alone episodes. This has allowed a greater range of stories – a tendency also evident in Moffat’s intent to bring new writers into the series.

Stephen Thompson’s previous Doctor Who scripts ‘The Curse of the Black Pearl’ (a sort of Pirates of the Caribbean homage with an unlikely Hugh Bonneville as Johnny Depp and non-acting model Lily Cole appearing as “a stroppy homicidal mermaid”) and ‘Journey to the Centre of the Tardis’ (more a variation on the Avengers episode ‘The House That Jack Built’ than an homage to Jules Verne) are not among my favourites. The former seemed something of a mid-season filler, the latter I felt was a wasted opportunity. This time – writing in collaboration with Steven Moffat – he’s produced a much better effort, which again demonstrates just how flexible the premise of Doctor Who can be. This time it’s a sort of Ocean’s 11 or Kelly’s Heroes riff as the Doctor leads a motley little band of criminals to rob the Bank of Carobraxos – “the most secure bank in the galaxy… a fortress for the super-rich”. The bank is protected by super high-tech security including DNA scanners, disintegrator beams and a telepathic creature known as the Teller who is able to sniff out anyone whose brainwaves suggest criminal intent.

The ‘breaking-into-an-impregnable-fortress’ story has been done before in Doctor Who, of course, most recently in Moffat’s ‘Asylum of the Daleks’, though ‘Time Heist’ offered some imaginative variations on the theme. One of these is that the robbery takes place in the past – timed at a point when the bank’s security is known to have been compromised by a fierce firestorm raging over the planet. Another is that neither the Doctor nor his companions know why they are robbing the bank, or on whose behalf: their minds have been wiped (it turns out voluntarily) by a ‘memory worm’. This temporary amnesia is supposed to help them evade the telepathic Teller: if they don’t know why they’re there, they cannot betray themselves with guilty thoughts. Or something like that. It’s perhaps no great surprise when the mastermind turns out to be the bank’s owner Ms Delphox (guest star Keeley Hawes) who staffs the bank with her own clones. But the twist – revealed through some characteristic Moffat non-linear time-travelling story-telling – is that the heist is not really a heist at all but rather “a rescue mission for a whole species” to release the Teller – itself a prisoner acting for Carobraxos only in order to protect its mate. In this sense the episode is a reminder that Doctor Who monsters are not always monstrous: the union of the two creatures as the Doctor returns them to their home planet recalls a similar motif in last year’s ‘Hide’.

This was another high-quality episode in what, so far, is shaping up to be a very good series. It provided an imaginative variation on the ‘breaking-into-an-impregnable-fortress’ story and the supporting characters were nicely fleshed out. The direction was brisk, the effects up to the usual high standard, though the set design of the bank itself was perhaps a little disappointing in relation to the imaginative interiors of previous episodes such as ‘Silence in the Library’ – much of it seemed to take place in white corridors reminiscent of classic-period Doctor Who. The Doctor’s ‘call-me-on-the-telephone’ gesture to ‘augmented human’ Cy (a cousin of Swedish tennis ace Bjorn, perhaps?) hints that we might not have seen the last of him in this series.

This entry was posted on October 13, 2014 by Who Watching in Episode Reviews and tagged Asylum of the Daleks, Doctor Who, Douglas Mackinnon, Journey to the Centre of the Tardis, Keeley Hawes, Peter Capaldi, Stephen Thompson, Steven Moffat, The Curse of the Black Pearl, Time Heist.