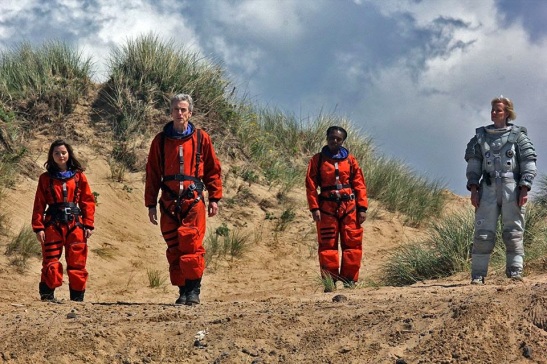 After the previous week’s relatively low-key episode, this series of Doctor Who returned to top form with the best adventure yet for the Twelfth Doctor. We’re on the Moon in the year 2049 (80 years after Neil Armstrong’s “small step for [a] man, one giant leap for mankind” and 21 years before the Cybermen will attempt to use it as a stepping-off point for their invasion of Earth in ‘The Moonbase’) and the Doctor and Clara have joined an expedition to investigate the mysterious increase in the Moon’s gravitational mass that is causing massive tidal waves on Earth and threatening to wipe out the human race. It turns out the astronauts are on what amounts to a suicide mission: to use the Earth’s last nuclear bombs to blow up the Moon and so save the Earth from destruction. So far so Armageddon: this is the sort of scenario that has featured in apocalyptic science fiction cinema. The twist here is that the increase in the Moon’s mass turns out to be caused by the hatching of a giant alien egg that has taken millennia to incubate. The creature is “unique – the only one of its kind”. The creature is entirely unaware, of course, that its birth will cause the destruction of Earth. So here we are faced with a classic moral dilemma. Or as Clara puts it: “An innocent life versus the future of all mankind – we have 45 minutes to decide.”

Some of the best moments of Doctor Who have been those which rehearse Big Questions About Life, the Universe and Everything. The classic moral dilemma in the original series was the Fourth Doctor’s “Do I have that right?” when he had the opportunity to destroy the Daleks at their point of origin in ‘Genesis of the Daleks’. Before that ‘The Aztecs’ had questioned whether a time traveller has the moral right to change the course of history: Barbara, a history teacher, mistaken for an Aztec goddess, resolves to halt the custom of human sacrifice, believing that this will prevent the destruction of the Aztec civilisation by the Conquistadors. On that occasion the First Doctor (William Hartnell at his imperious best) had warned her off in no uncertain terms that “you can’t change history – not one line”. This has always been one of the philosophical questions underlying the time travel narrative. Russell T. Davies developed the notion of ‘fixed points’ in time to explain why the Doctor could not intervene to avert catastrophe. In ‘The Fires of Pompeii’ (incidentally guest starring Peter Capaldi) the Tenth Doctor tells Donna that “Pompeii is a fixed point in history – what happens, happens. There’s no stopping it.” ‘The Waters of Mars’ explored the consequences of what might happen when the Doctor attempts to change a fixed point. He saves Adelaide Brooke and her team at Bowie Base One, declaring himself the ‘Time Lord Victorious’, only to realise the error of his decision when Adelaide, knowing that she must die to restore history to its proper course, shoots herself. The Doctor’s realisation of his transgression (“I’ve gone too far!”) hastened the end of his tenth incarnation.

Steven Moffat’s Doctor Who, however, has not had any truck with fixed points in history. For Moffat time, and the universe, are in a constant state of flux. We’ve seen the entire universe rebooted (‘The Big Bang’) and all of history happening at the same time (‘The Wedding of River Song’). The whole of Series 6 revolved around the Doctor’s death being a fixed point, only to avert it through the convenient insertion of a robot duplicate. ‘Kill the Moon’ – by Doctor Who debutant writer Peter Harness – again posits that the course of history is not predetermined. As the Doctor explains: “There are some moments in time that you simply can’t see… Whatever happens on the Moon, hasn’t been decided yet.” Clearly, when it comes to what is and what is not a fixed point in time, Doctor Who is able to both have its cake and eat it.

However, there is a major difference here from previous instances when the Doctor has saved Earth from destruction in that he refuses to make the crucial decision himself. This might be seen as a response to the issue – raised in the Torchwood story arc of Series 2 and rehearsed in rather a different form in the 2009 mini-series Torchwood: Children of Earth – of the Doctor’s moral right to intervene in the course of human history. On this occasion the Doctor defers the crucial decision to others: “I can’t do anything… There are moments in every civilisation’s history in which the whole path of that civilisation is decided. Whatever future humanity might have depends on the choice that is made right here and right now. Now you’ve got the tools to kill it… You don’t need a Time Lord… I can’t make this decision.” On the one hand this can be seen as allowing the human characters to exercise their own free will and make decisions for themselves (“It’s time to take the stabilisers off your bike”, the Doctor tells Clara). On the other hand it might be seen as the Doctor abrogating responsibility for making difficult decisions: this, certainly, is how Clara sees it, and the episode ends with her questioning her future with the Doctor. 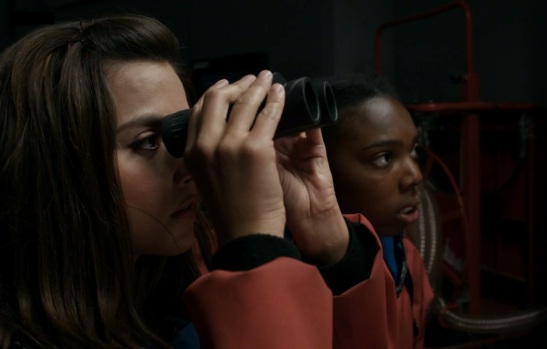 Ultimately the resolution lets everyone off the hook, as it must. Clara broadcasts to the world from the Moon to explain the situation, putting it to a popular vote by asking people to leave their lights on if they want the creature to be allowed to hatch and to switch their lights off if they want it to be destroyed. This cues a visual metaphor of lights going off across the world – i.e. the human race choosing to save itself. But – in defiance of the popular vote – Clara (and her ‘difficult’ pupil Courtney who has somehow tagged along) decide not to blow up the Moon. Of course this turns out to be right decision: the creature hatches but immediately lays another egg. The Moon is restored, the Earth is saved, the human race does not die out after all.

I’ve read comments in online forums that have understood ‘Kill the Moon’ as an anti-abortion allegory, even suggesting this was a deliberate ploy to appeal to the Pro-Life lobby in the United States. I’ve never been averse to reading allegorical meanings into Doctor Who – ‘The Curse of Peladon’, for example, seems to me quite explicitly to be supporting Britain’s entry into the Common Market, while the BBC Written Archives reveal that ‘The Monster of Peladon’ was consciously drawing a parallel with the miners’ strikes of the early 1970s – though I’m less persuaded in this case. For one thing Doctor Who has always evinced a broadly liberal-progressive agenda that supports the rights of minorities and the disenfranchised (which in a sense the Moon creature here is). For another the idea of a unique life form, and its right to life, has been a standard device of other SF series, including the American Star Trek, as well as Doctor Who. And as regards the appeasing of the American Pro-Life lobby, this makes little sense given that new Doctor Who has also openly embraced same-sex relationships and gay rights – which would hardly seem designed to win approval in conservative Middle America.

All told this was an excellent Doctor Who story. Director Paul Wilmshurst – another Who debutant – ably balances the spectacular lunar landscapes (partly CGI and partly a location shoot in Lanzarote) with the intimate (and intense) character-driven moments that the story requires. It’s the sort of story that, rather like last year’s ‘The Rings of Akhaten’, benefits immeasurably from the production values and SFX of the new series in comparison to the old. My only caveat is that in pushing the episode back to 8.30pm to allow for the return of Strictly Come Dancing on Saturday nights, it is too late in the evening. The overnight viewing figures for ‘Kill the Moon’ were 4.8 million, low by the standards of new Who, and, while this does not take into account the increasing number of viewers who time-shift or catch up on BBC iPlayer, I can’t help but feel that moving it around in the schedules does affect the size of the audience. When Doctor Who returned to television in 2005, one of the reasons for its success was that it was screened regularly at 7.00pm, which seems to me the perfect time. That’s one fixed point in time that I, for one, think Doctor Who should observe.

This entry was posted on October 15, 2014 by Who Watching in Episode Reviews and tagged Doctor Who, Kill the Moon, Paul Wilmshurst, Peter Capaldi, Peter Harness, The Big Bang, The Fires of Pompeii, The Wedding of River Song, Torchwood.