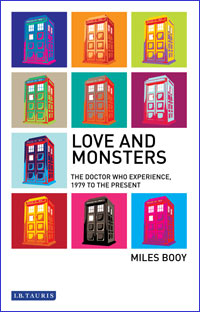 Much has been written about how fans relate to their favourite programmes, but there have been few historical accounts of how specific fandoms change over time. Scholar and Doctor Who fan Miles Booy has written the first historical account of the public interpretation of Doctor Who. Love and Monsters begins in 1979 with the publication of Doctor Who Weekly, the magazine that was to start a chain of events that would see creative fans taking control of the merchandise and even of the programme’s massively successful twenty-first-century reboot. From the twilight of Tom Baker’s years, up to the newest Doctor, Matt Smith, Miles Booy explores the shifting meaning of Doctor Who across the years. His account ranges from the Third Doctor’s suggestion that we should read the Bible, via costumed fans on television, to the 2010 general election in Britain.

Love and Monsters is also the story of how the ambitious producer, John Nathan-Turner, assigned to the programme in 1979, produced a visually-excessive programme for a teleliterate fanbase, and how this style changed the ways in which Doctor Who can be read.

‘Love and Monsters is an excellent, entertaining addition to the ranks of books that seek to define what it means to be a Doctor Who fan.’
Doctor Who Magazine

Miles Booy studied film, television and literature at the College of St Mark and St John in Plymouth, before doing post-graduate work in cinema at the University of East Anglia. He lives in Stafford with his wife and son.